When I arrived in Asia in 1984, everything was so new that my mind simply would not take in what it saw. I wandered around bug-eyed, marveling at everything but feeling content. I thought, “Isn’t it wonderful that I’m not experiencing any culture shock.” Two things I was ignoring were the fact that the actual shock was not due until later—when it did come—and the fact that my nightly retreats into British murder mysteries certainly qualified as trying to escape from my environment.

In 2011, I interviewed my friend Dr. Sandra Fahy on her first book, Marching through Suffering: Loss and Survival in North Korea, (Link) which was based on the testimony she’d gathered from North Korean famine victims who’d defected to Korea or Japan. Her second book is now with the editors at Columbia University Press and will be out soon.

This interview took place just after the Trump-Kim summit in Singapore, when  Sandra was at home in Japan and I was in the Philippines. The next interview, which will appear on December 1, deals with the history of … Read More 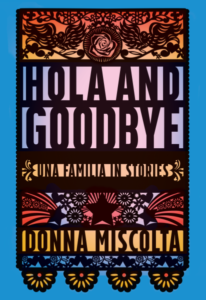 Donna Miscolta and I did an interview after the publication of her first book (Signal 8 Press, 2011), a novel dealing with a Filipino’s immigration to the United Sates and his subsequent family life in Southern California. The interview is available on this website, The Author of When the de la Cruz Family Danced. There’s also an accompanying video.

The opening story in her newly released story collection, Hola and Goodbye (Carolina Wren Press, November 2016), recently appeared online in Kweli Journal.“Lupita and the Lone Ranger” depicts a telling event in the life of a Mexican … Read More

In 2015, I interviewed my friend Geri about how her life had changed since she’d moved to Korea. The post was called k “Korea. A Vision List.” (Link) At that time Geri was a counselor at the US Army Garrison Yongsan in Seoul, where her fiancé Chris was teaching World History and Advanced Placement Psychology at Seoul American High School. Shortly after our interview Chris was wounded, although not in a motorcycle accident as I reported in a note at the end of the post.

For this interview, Geri and I spoke via Skype when she was at … Read More

This post is my friend Marita’s revision of our earlier interview write-up of her first trip to the Philippines with her daughter Paloma. Part 2 will deal with her second trip with her brother Rick and his wife.

I’ve wanted to make the journey to the Philippines since I was a child. Born in 1883, my father and his two sisters enjoyed a colonial lifestyle in Manila that he spoke about frequently. He told stories about the family’s big house and luxurious way of life. The tales painted a paradise for me– a happy, lush tropical place. … Read More