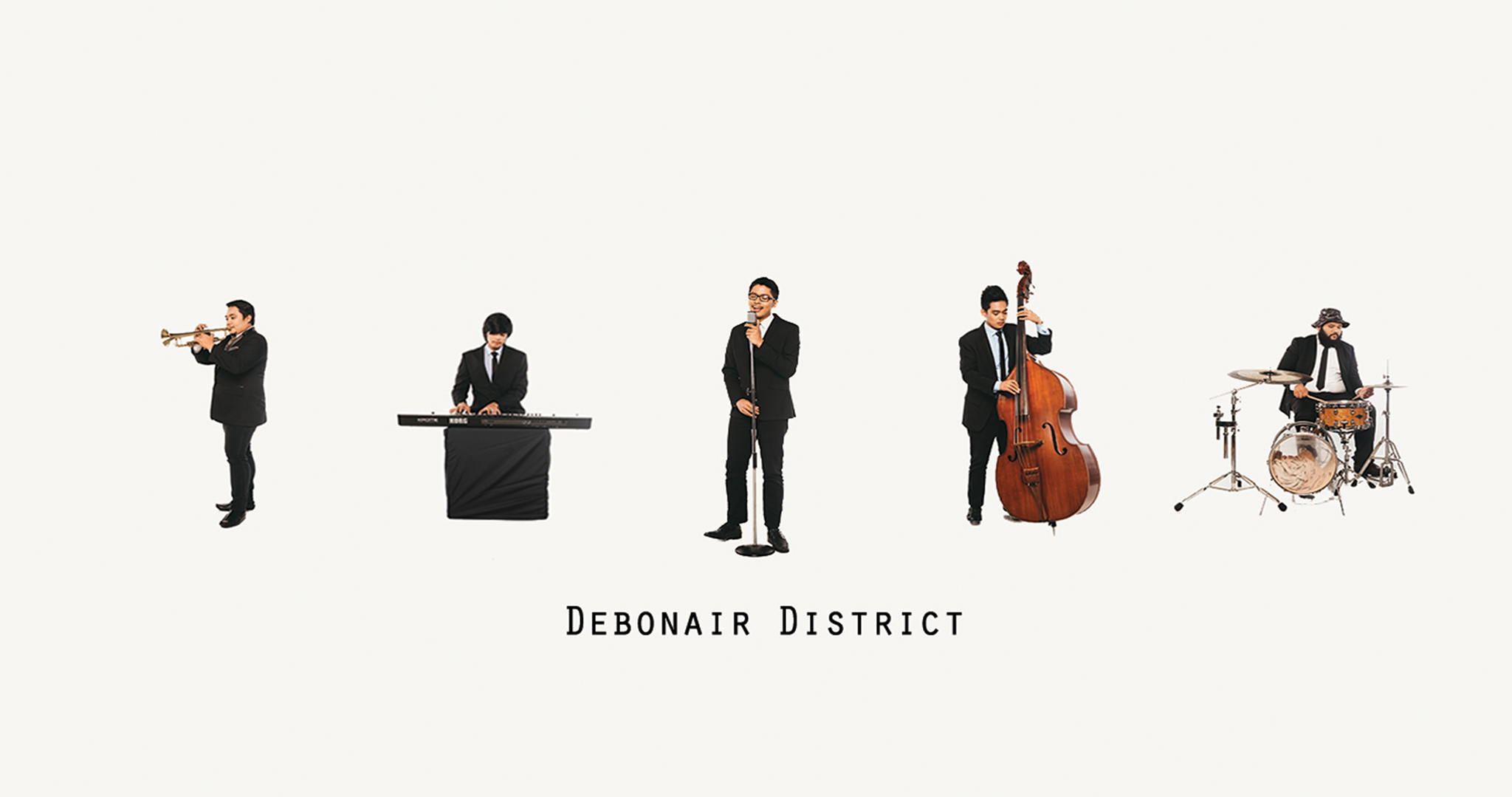 Okay, we started almost two and a half years ago, so in 2016 when I started studying music at the University of the Philippines. This was actually my second degree; I’d previously majored in film at Ateneo University. But now that I was in music I’d decided I wanted to form a jazz band, and I brought the idea up with Neo Manosca, who plays trumpet. He was my batch-mate at the College of Music. He recommended three players from another band he’s in.

So I called us together and suggested that instead of playing the usual jazz standards that everyone knows we could do Filipino folk songs, Filipino OPM [original Pilipino music] and kundiman, or love songs, all rearranged in the jazz idiom. They liked the idea.

We started with a few arrangements of kundiman—enough for one set—and did our first performance at Tago at an open jam. From there we began meeting people and making contacts. We’ve also been expanding our repertoire to include folk songs and, because a lot of people love them, the classic jazz favorites.

Then we went on to weddings. At the moment we already have five booked for this year and next year. I think it’s good for us to do this somewhat more commercial kind of engagement in addition to the more independent jazz we do. Variety is a good thing.

What about your individual players—who are they?

Most of us are from the UP College of Music. The drummer, Chico Macorol, is a percussion major who has one more year of school. He’s well-versed in all kinds of percussion, not just drums. He plays with the UP Symphony Orchestra as well as with another band.

Then the keyboardist is Harold Santos, who has already graduated with a major in Asian music and supports himself scoring films. He has another group which does sambas and Latin jazz. He’s a smart guy, an intellectual, and knows a lot of jazz literature and jazz theory as well as a lot about personalities and jazz figures. Harold also arranges. In our group, I start the arrangement and then I say, “Do you have cool ideas that could add to the flavor of the piece?” Harold would almost always be the first to give suggestions.

Our double bassist, Joey Biato, plays in orchestras outside the college and in musicals. He’s done a lot of performances and he’s very busy as of the moment. I think we’re the only band he’s in now.

Bojo Masa, our second trumpeter who substituted for Neo, is another talented one also goes around to a lot of groups. His kind of jazz is more of the big band jazz/samba type.

Right now instead of a trumpeter we have a soprano saxophonist, Joemel Relativo, a UP student who’s taking a leave of absence from school. He also plays with other bands.

So two band members have already graduated, one’s on a leave of absence, and the others are finishing up. I have another year. We’re all full-time musicians. All prototypical musicians, playing with various groups and doing arrangements. That’s typical for musicians in Manila, rather than having a day job not connected with music.

When the band formed we were all already well-versed in jazz. That’s also true of the sax player, who joined us later. Since we’re all familiar with the genre, the band can be more flexible. Before we agree to a gig or a rehearsal, we have to check our schedules first in order to keep our other commitments. When we find an open spot we rehearse then. If there’s a conflict we turn down a gig or reschedule a rehearsal.

That still leaves you as the singer and arranger. Before music you were doing film?

When I was in high school enjoyed filming my friends, and I decided to study film with the idea of doing writing or directing or cinematography. But after I graduated I felt I could do more in another field.

What kind of film were you doing?

Oh, I really liked making narratives, but everything I did was a project required for school. I didn’t film anything for the public. So after I graduated I realized I didn’t find film as fulfilling as music. So I spent a month doing arrangements and singing genres like barbershop, and I realized it was fun and also satisfying in itself. I pushed ahead and enrolled at UP.

Let me ask you, are you the son of [the famous musician, composer, conductor] Ryan Cayabyab?  And you’re Krina’s brother?

I interviewed her and the other members of [the focal group] Baihana a couple of times (Link) (Link) Say hello to those people for me, will you?

Yes sure of course.

When I listened to you guys perform, there seemed to be a kind of musicality other than jazz underlying what you were playing. Do you know what I’m talking about? Like maybe classical training. But it was working together with the jazz.

Oh, that’s interesting to hear. How does it sound?

Very good. I was impressed. I wish I could explain a little better. Maybe I’ll be able to the next time I hear you guys play. There was something different in your sound. Or maybe it was because you were playing some Filipino folk songs that I hadn’t heard before, but it seemed to be consistent throughout your performance. I thought maybe you were brought up with a broad musical background and that’s what it was.

Maybe it’s in the arrangement?

Yes, I was brought up listening to classical music. It was only in high school that I got exposed to pop music.

Your dad heads a school too, right?

Yes, but the school is more like an extension program for those who want to take lessons but can’t afford music school, so they’re learning during summer vacation or in their free time. The students include both kids and adults.

How often do you guys play together?

We rehearse only when we have a gig coming up, and we have at least two gigs a month. We are busiest with weddings. We’ve already booked several for this year and next year. We also have a few private events or gigs at Tago and elsewhere. For example, we have a performance coming up on May 17 at the Ayala Museum, so we’ll be rehearsing probably the first week of May. And we’re expanding a bit. I invited a guitarist to join us so we can see how our group sounds with a guitar.

My next question has to do with your use of Filipino melodies. I know that other people are doing some of this too, like the guitarist Noli Aurillo, who’s recorded a lullaby and other songs. Jireh Calo sings in Tagalog, but those songs may be originals.

All the bands I know do either originals or covers. The reason I started the band was to do something like this, so that Filipino Generation- Z can hear these old songs. We have beautiful music, beautiful Filipino kundiman and folk songs that a lot of people aren’t familiar with. It’s been a long time since someone’s done that. I remember in the 70s and 80s there were some jazz groups that infused Filipino songs into jazz. Eddie Munji and my dad had their own albums of jazz arrangements of Filipino folk songs. So I wanted to bring it back.

That sounds good. I was also thinking about the 1970s. There’s a documentary out on CD called Pinoy Jazz which includes that time. (Link)

So which tunes are you playing?

They’re also singing in the style of the 1940s.

Where do you see your group going from here, or are you just taking things as they come?

Right now we’re taking it slow. We want to see how we can develop. It’s the Filipino music that’s what’s keeping us together. Our next big project will be having all this recorded, probably within a few years, so we can share something new in the jazz genre and the Filipino classics. We’ll see whether or not it’s effective to play with a guitarist.

Well, I can tell you that when I’m listening to a jazz CD that has Filipino music on it, somebody always mentions it, My housekeeper, for example, really warms up to Filipino melodies. Part of the reason I like listening to them is that given Filipino history it’ nice to be able to support the part of the culture that wasn’t colonized.

I’d like to say that, although the jazz community is still small, I’m glad people are creating their own jazz groups. You might like getting to know groups like Project Jazz which have different personalities. The jazz scene does have things to share.

Once we were invited to play at Mo’s for someone’s birthday, People liked our Filipino music. A few weeks ago we were asked to play at their school, and we were told we’d inspired them to form their own jazz group. For us this is s heart-warming and encouraging. We hope to do the same with many others. What I really want is to inspire people to listen to these old classics.

When I read that Debonair District was doing jazz arrangements of Filipino folk songs, etc.  I got emotional because I know my dear friend Eddie Munji III would have been really proud of them. He passed away a couple of years ago. He was more like a brother to me. He would go to my gigs and jam with me. He started Pinoy Jazz during the ’70’s.

He was so disappointed when he made this album because the Filipinos were not yet ready to hear his kind of music. But jazz singers and musicians like me, are so happy that a group of young musicians finally got interested with Eddie’s kind of jazz, Pinoy Jazz! I bet he’s smiling up there at these guys. Maybe you could share this link with Toma Cayabyab, who might find some ideas with Eddie’s music and even honor him at a concert.

Hi there, just wanted to tell you, I liked this blog post.

It was helpful. Keep on posting!