When I moved to South Korea in 1988, the country was recovering from the dictatorships of Park Chung-hee and Chun Doo-hwan. In a week it would host its great coming-out party, the Seoul Olympics, which despite being well organized would be temporarily mired in controversy, with the national inferiority complex exposed.

My first impression of Seoul was that it was as militaristic, as nationalistic,  as drab and as prudish as post-revolutionary China could be. and far more misogynistic.  Pro-democracy student demonstrators battled with riot police, although it was clear from their own organizations that they didn’t know what democracy meant. … Read More

When I arrived in Asia in 1984, everything was so new that my mind simply would not take in what it saw. I wandered around bug-eyed, marveling at everything but feeling content. I thought, “Isn’t it wonderful that I’m not experiencing any culture shock.” Two things I was ignoring were the fact that the actual shock was not due until later—when it did come—and the fact that my nightly retreats into British murder mysteries certainly qualified as trying to escape from my environment.

Part 1 of this interview focuses on Trecia’s anthology of essays by black women about living in Asia. In Part 2 we share our observations. Unfortunately, her dealings with her employer were not atypical of those of westerners in general. Trecia is now back in North America at a job which suits her talents and experience in intercultural relations. Since the interview she has taken on a job as intercultural co-coordinator. (Link) 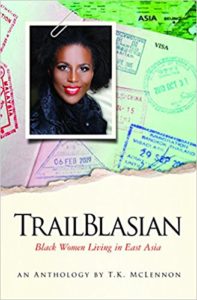 In my two and a half years, seeing other westerners come and go wore on me. Because on the one hand you’re not really … Read More

The title of Trailblasian is a coinage of ‘trailblazers + black + Asians. The book is an anthology of personal experience stories written by black women living and working in Asia. The editor, T.K. McLennon, Trecia, found most of the contributors online. She was inspired by the Nigerian writer Chimamanda Ngozi Adichie, who in a TED talk warned against “the danger of a single story.” Trecia explains, “When you only hear one story or a narrow set of stereotypical stories about a group of people, it keeps you from knowing or having a better balanced understanding of that group.” Trailblasian … Read More

Ana’s experience teaching in the language school reminded me of the first time my supervisor observed me when I was teaching elementary German in the US as a PhD student in German literature. I was very nervous. At the end of the class she pointed to the blackboard where I’d made a mistake in elementary grammar—in subject-verb agreement or something like that. I blushed, and we laughed it off. At the same institution I took a linguistics class from an instructor whose illustrations of linguistic phenomena on the board always contained English spelling errors. That was a bit much, because … Read More