known that he’d died. I sat with Bessy, who was upset about an article that had appeared in a local paper, and told her she could tell her story here however she wanted to. We spoke sometime later online when she was at home in Quezon City and I was at home in Antipolo. Thanks to Bessy for the photos.

I met Noli briefly in the 1980’s through my brother Rico, who plays bass guitar. My father played harmonica, and Noli accompanied him a few times.

Then I heard he’d moved to Malaysia and Thailand to work. In 1993 he returned to the Philippines to look after first his father until his death about two years later and then his mother. It was during this time that he took up painting.

In 2000, I met Noli again at my brother’s birthday party, Rico’s birthday was on March 24, and Noli’s only two days later, so they celebrated together. That’s when Noli told me he’d seen my picture in a music magazine—as a teenager in the 70’s, I’d modelled for BM Music Magazine. He said he’d looked at my photos and said, “I’m going to find that girl.” And he did. We both felt a spark that grew into first friendship and then love. He also said I wouldn’t have liked him if I’d met him earlier because of his heavy drinking. In time it grew more moderate. I’d pick him up at his home in Cubao and drive him to his gigs, where I happily enjoyed his music and documented the performances with videos and still photos.

Over the years, Noli wrote compositions, but he had no money to get them recorded. So in 2004, we came up with an anything goes fundraiser called “No Limits.” A lot of musicians were there to support and play with him on that show and that raised enough money for his first indie recording called Noli Aurillo’s Meandering, a two-CD set. nfortunately, it was sold out at his gigs and I don’t think there’s a copy left.

One night, Noli was playing at a wedding, and there he met Mr. Judes Echauz, the CEO of Standard Insurance, who always clapped in response to Noli’s playing. Actually, in the Filipino tradition I say “Sir Judes” out of respect. When the event was over, Sirr Judes expressed his admiration. He’d become an instant fan. That was the beginning of a great friendship which opened doors to gigs at the many comJudespany events and private birthday celebrations. Sir Judes was responsible for producing a series of Noli’s five-CD which were called In Pursuit of Excellence. The music was either solo guitar or guitar accompanied by the Manila Symphony Orchestra. Noli’s dream come true. Sir Judes is the kindest and the most generous man you could ever meet. I am so thankful to him for being such a good person and for the love and support he gave Noli. 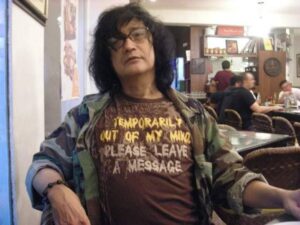 Noli had more dreams—producing more of his compositions, recording compositions by my grandfather, Manuel Velez. Noli had already arranged the songs, but again we did not have the money to record them.

In the early years of our relationship, Noli had a bad temper, and he had affairs with other women. I loved him despite his human frailties. Later, he said, “I will never leave you because you’re one-of-a kind, not like any of the other women who’ve been in my life.” You can’t speak about Noli and our relationship without mentioning that we were able to get through the rough times. Whatever they say, Noli and I had a strong bond of love that kept us together to the end.

Noli had a great sense of humor and was very witty. I loved the way he made me laugh. I told him, “In a relationship, if you bring out the worst in each other, then it’s time to go.” He may have had moods, but he knew how to control himself. I never nagged him but just inspired him in all aspects of his life.

His voice could sometimes be loud. If we were out in public, like in a restaurant, I’d suggest that he tone it down because people might think he was scolding me, but he’d say, “I’m from Tacloban. This is how we talk.”

At the beginning of our relationship, I spent nights with him and went home in the morning. Later, I was able to build my own unit and then he lived with me, while keeping all his things in his apartment. There were times during the summer when he would play for a month in Boracay. I would take care of his place and then join him at the end of the month. 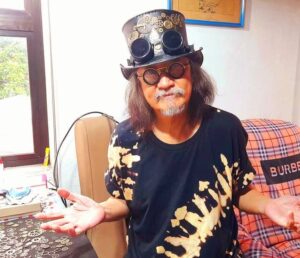 With Noli, there were so many magical moments. I’ll give you three examples. 1. Once, a wheel on my car got stuck in a hole in the sidewalk. Then suddenly, four men appeared, picked the car up and out of the hole and then left. We had no idea who they were. 2. Then once in Boracay, Noli was playing up in front and gestured that I should come up and listen. When he strummed the guitar, it sounded like a choir of angels. Both of us heard it, but the people at the surrounding tables obviously did not. We had no clue where the heavenly sound was coming from. 3. Once on his birthday gig, he announced he was picking up the tab for all the magicians’ food and drink that evening. I was concerned that he didn’t have enough money, but he said not to worry. Sure enough, a stranger at the bar paid the bill and Noli said, “I told you not to worry baby.” The man was an earth angel we never saw again.

The song we used as the background music to my farewell tribute to him on you tube was his beautiful composition. “All Roads Lead Home.” I think it is one of his masterpieces. It took him months to record it because he had other musicians working with him, like Koko Bernejo, Rommel de la Crux, Elhmir Saison, Simon Tan, Ike DY Liaco and Skarlet Brown. His CD was so diverse-folk to R&B, standard to blues, rock and roll to progressive rock, deep jazz to fusion to new age and avant-garde to whimsical.

Noli was the only musician I know who could, when someone requested a song he knew but had never played, make an arrangement of it right on the spot. That was what a genius of a musician he was.

He also told me “You know, baby, when I’m on stage my fingers go automatically to the chords and the music just flows.”

During the pandemic we were so blissful here at home. We had time to ourselves. He had the time to practice his magic, chill and play the guitar, he’d make me sing, we’d watch a Netflix movie festival or just enjoy our moments on the roof deck. He learned to cook new dishes in addition to those he was already very proud of, his infamous chili con carne, crispy chicken and his scrambled eggs. He also got into decorating punk hats, painstakingly cutting denims and shaping them into a hat.

Noli said, “Baby let’s make a pact not to get vaccinated. The vaccines are experimental, so the effects on humans are not certain.” Although I was undecided and wanted more time to observe, since his mind was made up, I went along with it. His nephew, Doctor Dan, was unable to convince him that we should get vaccinated. When Noli set his mind to something, he stuck to it. But in the end, he texted a friend in Tacloban that he should get vaccinated.

At the time, we tried to be healthy, taking vitamins, drinking fruit juice, making fruit and vegetable smoothies in the morning. We didn’t think anything was going to happen to us. It was a real surprise, descending on us so fast.

Noli often had allergy symptoms like a runny nose and a little cough. Usually, after a good night’s sleep, he’d be fine. This time he had a slight fever. He did call his sister, who’s a doctor, and she consulted Dr. Dan. He prescribed medicine for Noli and later for me. A few days after taking the medicine, we were not recovering. Our barangay [district] captain sent an ambulance to take us to the hospital. 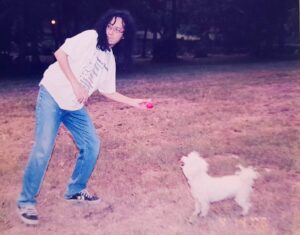 When we got there everything was ready. They checked our blood oxygen level, which was low, and had other tests.  In our hospital room we were diagnosed with Covid. The next day they Noli had a hemoperfusion [a method of filtering the blood outside the body to remove toxin], then a dialysis procedure. Before I knew it, he needed to be brought to the ICU. Everything happened so fast. He was in a wheelchair with his back to me. I was so weak, I called him, “baby, baby.” He raised his hand. I reached out my hand to him and could only touch his hand before they wheeled him away.

We had arrived at the hospital on October 7. On the morning of October 16 Dr. Dan came to tell me, “Tita Bessy, Tito Noli is gone.”

“We did everything we could. We gave him all the medication, treatment, everything he needed to survive. We tried to revive him, but I said to stop because I didn’t want to hurt him anymore.”

Then Dr. Dan called me for a video chat and he showed me Noli’s lifeless body. All I could say was, “I love you, baby ko! You rest now.”

Noli manifested himself to me when I was in the hospital. I was crying as I was messaging my friend Corky, when all of a sudden very soothing and calming piano music came out of my cellphone followed by Noli’s guitar playing Bohemian Rhapsody. I realized it must be my baby, making me feel his presence through his music.

There was another incident when I got home. I was crying and telling myself I didn’t have a chance to say “I love you” to him in the hospital, although we said it to each other every day when we were home. I fell asleep crying and holding my phone. When I woke up, I saw N

oli’s Messenger on my phone with a message I’d sent him on October 8 in response to his. I said, “I love you, baby, it’s just that it’s taking time for me to answer you as I’m slipping in and out of consciousness.” I guess he wanted to remind me that I had said I loved him.

A couple of days later, Dr. Dan brought Noli’s urn to my home, and it stayed with me till April 3, when I took it to the final resting place in Tacloban. While the urn was here. I had several dreams of Noli going down to the bathroom in his favorite purple pajamas. He also woke me up calling me “baby.” There were two other dreams where I saw his big black-and-white photograph beside me and I saw another photograph, a portrait of him in a red coat and curly, shoulder-length hair. He looked young and peaceful. I pray for him and talk to him every day.

I  Music and video with Bessy talking about Noli. (Link)

Noli’ arrangement of  Rhapsody in Blue with the Manila Symphony Orchestra. (Lin)