Gyoungju–also spelled Gyeongju, Kyongju–is the seat of the ancienet Shilla 0r Silla dynasty (57 BC to 945 AD), Because there are so many sights worth seeing outdoors, the town is called “the museum without walls.” It’s my favorite vacation spot in South Korea.

At least it isn’t raining. You sit on the bus watching town and countryside pass by. When you let your eyelids droop, you can almost feel your body sink into the quilts on your heated floor back at the Hanjin Yǒgwan. Hot water pipes under the floor, what a cozy way to heat a room.

Gyoungju has been wet and gray for over a week. Each day you’ve set yourself two sight-seeing tasks, accomplished them, and tried one new restaurant. There is no lack of things to see. Mr. Kwon, your host at the inn, is an expert on the local sights, and he provides all guests with maps of the town and its environs. You’ve been to the beautiful Bulguksa, or Bulguk Temple, and the lovely grotto further on. You’ve seen the pond where many precious relics were discovered and visited Tumuli Park, which holds the burial mounds of kings.  Each day you’ve returned gratefully to mindless lethargy on the heated floor. Perhaps you give yourself Korean vocabulary homework which you fail to do, perhaps not.

For your hike through the Namsan, the sacred South Mountain dotted with Buddha statues and reliefs, you’ve been waiting for a clear, sunshiny day. But it seems pointless to put it off any longer.

The guidebook has maps of the mountain showing paths around the Buddhist temples, pagodas and rock sculptures scattered over the landscape. What seems to be the best trail begins in the west with three royal tombs, snakes eastward near a stream, past carved images, and climbs upward to a hermitage. Then it follows the saddle and the mountain skyway down to a village in the south.

You figure the bus is getting close. You stand up and begin working your way toward the front of the bus, holding onto the top of one seat after another. When you reached the driver, I you say, “Samnung. Samnung,” the location of the three tombs.  He yells, “Kitario.” Right. He’s telling you to wait. After a few minutes he stops, opens the door and points at a trail to the left.

The leafy ground is wet under your boots. There’s a sort of entrance to the trail and some houses. Not far from the road you come to the burial ground of the tenth-century kings named Park. The huge tombs are covered with closely-cropped, dead grass and set against a backdrop of dark evergreens and a few leafless skeletons. Behind is a gray-blue mountain peak partly obscured by mist.

The trail lies along one side of a shallow creek bed, then merges with it, then splits from it again. Walking is easy but rather slow over sandy dirt, then slippery-wet leaves and needles. Then creek stones. Then up steps formed by dirt and shallow tree roots.

You remember a previous trip when the sun appeared and you’d turned to see the distant blue-gray peaks and then look down at a royal tomb. For a very brief moment, sunlight turned the wheat-colored grass to bright gold, transforming the burial mound into a morning sun rising over the curve of the hill. 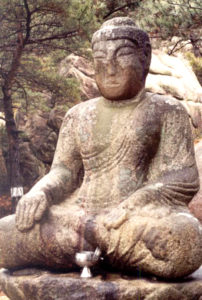 “Here comes the sun.” The song rings in your ears, so you sing it out to the mountainside.

The first seated Buddha was headless, a single granite boulder placed casually near the trail. What remains of him is the torso, the tops of arms and legs, the incised lines to show the folds of his robe.

Farther on is another statue. The left hand rests palm-up on the lap, while the right hand is placed palm-down over the right knee. You sit beside the pedestal and check the guidebook. It says the position of the hands calls the earth to witness the Buddha’s right to enlighten humanity. The face with the half-closed eyes shows a mind directed inward, indifferent to both the mud stains on its surface and the view of the valley below.

Detachment. Maybe you tell yourself that’s what you need. You sit down on a dry rock surface nearby, pull your water bottle from your backpack and let your mind wander down the trail and off to the distant hills. This solitary place is good for meditation or reflection on whatever you wanted to leave behind. 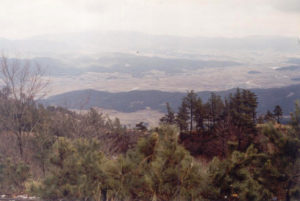 Then you get up and look for the best way up the trail, over rocks, over dirt-and-tree-root steps, around trees and the muddy slide-marks of previous climbers. You are unable to find many of the items listed in the guidebook, which you suspect are obvious only to someone who knows exactly where to look.

The steep trail leads to a ramshackle hermitage, where no one seemed to be at home, then up again to an enormous rock tabletop.  Three sides were open to a spectacular view of the valley. As you step toward it, you discover a metal altar and then a relief twenty feet high and fifteen feet wide, cut into the gray and brown cliff wall. Shallow lines form the body and the robe, but the head protrudes from the rock. His facial expression seemed non‑judgmental, slightly amused, maybe even a little puzzled. The statue, you’ve read, is the second largest in the Namsan region, facing east to catch the first rays of the sun. It represents Miruk, the Future Buddha, who will one day appear with new teachings for the enlightenment of all sentient beings.

You pull off the windbreaker you’ve worn over your sweatshirt, throw yourself down and stretch out on your back below the Buddha. A breeze plays over your sweaty face and neck. All the tension in your body seems to gush out your fingertips and toes. You feel yourself expanding over the mountaintop, over the valley and then dissolving into space.